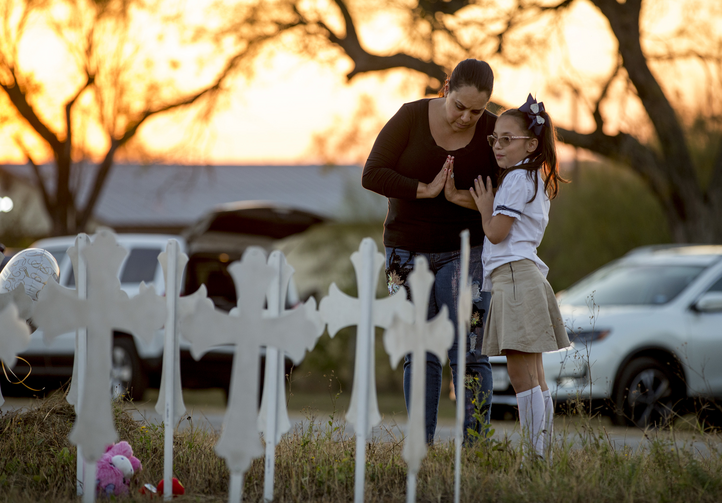 Like the episodes of violence themselves—three of the nation’s five worst shootings in modern history have taken place over the last 24 months—responses to mass shooting events from politicians and activists seem to have adopted a routine. Those with an absolutist interpretation of the Second Amendment offer thoughts and prayers but insist that the immediate aftermath of a shooting is not the right time to discuss gun control.

Those who wish to end easy access to high-capacity, military-style weapons say thoughts and prayers are insufficient without action and demand legislators stand up to the national gun lobby, now prompting a backlash by some conservatives who say the supporters of gun regulation mock religion.
Just days after the nation’s deadliest church shooting, where 26 people ranging from 17 months to 72 years old were killed by a lone gunman with an AR-15 semi-automatic rifle, a civilian model of the military’s M-16, the response followed the same well-worn path.

The head of the U.S. bishops committee on domestic justice issued a statement on Tuesday expressing support for a “total ban on assault weapons” and calling for a “real debate about needed measures to save lives and make our communities safer.”

“For many years, the Catholic bishops of the United States have been urging our leaders to explore and adopt reasonable policies to help curb gun violence,” Bishop Frank Dewane, leader of the Diocese of Venice, Fla., said. “The recent and shocking events in Las Vegas and [Sutherland Springs] remind us of how much damage can be caused when weapons—particularly weapons designed to inflict extreme levels of bloodshed—too easily find their way into the hands of those who would wish to use them to harm others.”

The statement also noted that the bishops continue to support universal background checks, restrictions on the possession of high-capacity weapons and increased access to mental health care.
Chicago Cardinal Blase Cupich, interviewed at the University of Chicago by Washington Post writer and Commonweal magazine contributor E.J. Dionne on Nov. 6, renewed his call for a ban of high-power weapons, employing a grisly image about hunting to make his point.

“Reasonable” gun control, he said, is “not against hunting. When I was [a bishop] in South Dakota, we hunted.”

But, he continued, “When the hunting sport is human prey, we have to take action.”

“It is important to do mourning and support and expressions of outrage,” he said. “But then we also need to tell ourselves, that is not enough. We need to take action. We need to make sure that our legislators know that we need to enact laws that ban these high powered weapons.”

He also echoed Pope Francis, who has been fiercely critical of the weapons industry during his pontificate, asking the U.S. Congress in 2015: “Why are deadly weapons being sold to those who plan to inflict untold suffering on individuals and society?

“Sadly, the answer, as we all know, is simply for money: money that is drenched in blood, often innocent blood,” the pope said.

The Chicago archbishop agreed that resistance to limiting access to military-style weapons is “about money.”

“There’s a lot of money here,” he said. “It’s funding the political opposition to any gun control. And there’s a lot of profit in this. Let’s not be naïve about that.”

Speaking to reporters after the event, the cardinal was blunt in his call for legislators to take action.
“Let’s start with these high-powered weapons. Both state and federal law need to change to make these guns not available. We don’t need military weapons in our society. We’re not supposed to be at war with one another,” he said.

Other bishops also appear to be fed up with the lack of progress of gun control.

In rural Vermont, where hunting is a common way of life, Bishop Christopher Coyne released a statement that seemed to suggest prayer should stir believers to take action on guns.

“I find my horror at these murders to be mixed with frustration and guilt—frustration that we as a country cannot seem to come together to do anything about this evil plague and guilt that I bear for being part of a culture that fosters such violence,” wrote the bishop, who heads the communications committee of the U.S. Conference of Catholic Bishops.

He called for prayers for the victims of Sunday’s violence but also for penance for a collective guilt that allows such carnage to continue.


“But also prayers for ourselves that we may as a country somehow find a way to have a meaningful dialogue about what is to be done to stop these mass shootings, with an openness to hear each other and to seriously consider new policies and laws to protect people from this horror,” he wrote. “Each of us must search our own heart and ask, ‘Lord, what must I do?’”

Closer to the shooting in Texas, where guns are a cherished part of culture, Archbishop Gustavo García-Siller responded to the shooting with a straightforward message posted in a Tweet: “No war, no violence, no guns.”

Speaking to America, Archbishop García-Siller said he is “hopeful” that a debate about gun regulations could begin following the shooting.

“We are not having an open debate,” he said. “We have been pushed not to have a debate about this matter.”

But, he continued, “we need to take actions in little ways and in stronger ways on how to promote a culture of peace, compassion, kindness, tenderness.”

Catholic bishops in the United States have long supported restrictions on gun ownership, especially high-powered and semi-automatic weapons like those used in the Texas church shooting. Gun-rights advocates have noted that existing laws should have prevented the shooter from obtaining his weapon, but authorities were not notified about his domestic violence criminal background.

Similar weapons were used in the shooting in Las Vegas on Oct. 1 that left 58 dead and hundreds injured; the 2015 office shooting in San Bernardino where 14 died; and the 2012 shooting in Newtown, Conn., where 20 children and six adults were murdered just days before Christmas.

Texas bishop in wake of church shooting: ‘No war, no violence, no guns’
Michael J. O’Loughlin

The U.S.C.C.B. released a pastoral statement addressing gun violence in 1994 titled “Confronting a Culture of Violence: A Catholic Framework for Action,” and it supported an assault-weapons ban enacted that year that was allowed to expire in 2004. In 2000, it called for “sensible regulation of handguns.”

In 2015, the bishops pledged to continue advocating for a litany of gun control measures, including universal background checks, limits to civilian ownership of high-capacity weapons and ammunition and increased access to mental health services.

It is unclear what effect a push for gun control by bishops could have.

Fred Kammer, S.J., who heads the Jesuit Social Research Institute at Loyola University New Orleans, said bishops already have the foundations for a gun-control campaign, pointing to the U.S.C.C.B. voters’ guide, “Forming Consciences for Faithful Citizenship,” which calls for “supporting reasonable restrictions on access to assault weapons and handguns.”

Father Kammer said bishops should consider partnering with “with other faith communities across the board.” He said the “corrupting power of money in our politics,” especially “the corrupting power of the National Rifle Association and its influence on Congress,” should be of particular concern.
“If they do it, the bishops really need to commit serious resources to do it,” he said.

Responding to a question at the University of Chicago event from religion journalist Amy Sullivan, Cardinal Cupich said the U.S.C.C.B. is considering how it can contribute to a national conversation—but he said local efforts are more effective. Cardinal Cupich has frequently spoken about Chicago’s high levels of gun violence, which experts say is exacerbated by lax state laws in next-door Indiana, which makes purchasing and transporting firearms into the city relatively easy. (U.S. bishops also advocate for a federal law to criminalize gun trafficking.)

“National efforts to ban guns can only go so far, so many bishops have taken up the fight at the local level,” he said. “I think that’s where really it has to happen.”