Silent fright: Church Nativity features mass shootings Priest: 'The solution isn't to arm more, it's to disarm and to trust each other' 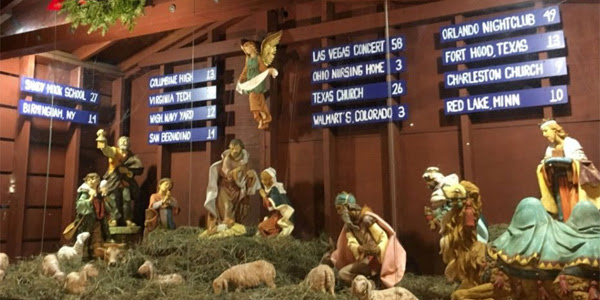 A Catholic church in Dedham, Massachusetts, is showcasing a Nativity scene that features a list of the nation’s 16 bloodiest mass shootings just above the display of baby Jesus, Joseph and Mary.
St. Susanna’s Parish – described as one of the most liberal parishes in the Archdiocese of Boston – apparently wants to motivate its parishioners to take action on gun control.


Father Stephen Josoma told Boston’s WFXT-TV 25 that the church is hoping to motivate parishioners to take action on gun violence in the U.S.


“We were discussing the gun-control issue and how it seems to be stagnated across the country,” Josoma said.


Many of the locations, particularly schools, theaters and military installations, were known to be “gun-free” or partial “gun-free” zones.


Josoma told Boston.com: “It just kind of hit us all, about 12 of us here in the group in the parish, that when it comes to the mass shootings, it seems to be like Groundhog’s Day in that just kind of repeats itself, repeats itself. You have a shooting and there’s a period of time afterwards where we have to pray for the victims and support the victims, but we can’t talk about any change – that will come later. And then the later never seems to happen until the next one. This has happened since Columbine really. There hasn’t been much change implemented to break that cycle. …
“Some folks would say that a good guy with a gun could stop a bad guy with a gun. Fort Hood is on our list. It doesn’t work that way.”


With the exception of military police and soldiers participating in field drills, regular soldiers are generally not armed on Fort Hood, particularly not while performing their daily duties.


“We have police stations that have experienced this,” Josoma said. “The solution isn’t to arm more, it’s to disarm and to trust each other.” 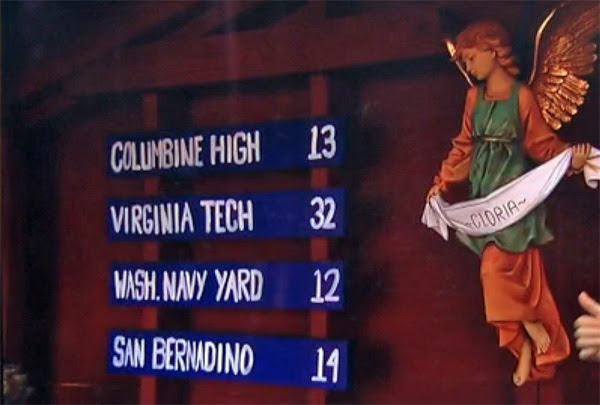 As for his statement-making nativity scene, Josoma told WFXT-TV 25: “This is not the picture of Christmas peace we want to have in people’s minds for years to come. It can’t be this forever. It just has to change.”


WFXT-TV 25 reported that the unusual scene is “resonating with parishioners.”
Pat Ferrone told the station: “You can interpret it in different ways. It’s just to draw people in, make people think.” 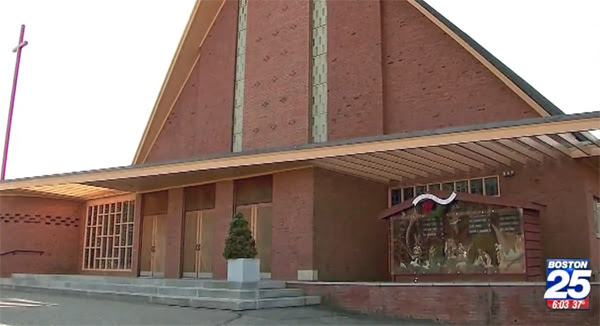 St. Susanna’s Parish in Dedham, Massachusetts, features a nativity scene with a list of 14 mass shootings in the U.S. (Photo: screenshot)

Lisa Mercuri told WFXT-TV 25, “Reading each sign, it gives you a sadness inside and you hope that we don’t have to add anymore.”


A banner over a wreath hanging from the front of the nativity states, “If only you knew the things that make for peace.”


The TV station notes, “The people who put up the display are aware not everyone is going to like it, but they hope they’ll keep an open mind.”


As WND recently reported, leftists have been using traditional nativity scenes to make political statements this year. In another case, the LGBT community took to Twitter to post images of two-dad and two-mom “gaytivity” scenes featuring two Josephs or two Marys.

September 02, 2018
Faith-Based Anti-Gun Coalition Formed to Take Down a Gun Manufacturer...From The Inside Out A group of 11 Catholic groups came together to purchase stock in Smith & Wesson. The group purchased 200 shares, the minimum number required to for shareholders to demand reports from the company. Now, they want the gun manufacturer to provide a report that details what the company is doing to promote "gun safety measures" and "produce safer gun and gun products." According to an SEC filing , which is submitted to the U.S. Securities and Exchange Commission (SEC), here's what the group wants to see from Smith & Wesson: Shareholders request the   Board of Directors issue a report by February 8, 2019, at reasonable expense and excluding proprietary information, on the company’s activities related to gun safety measures and the mitigation of harm associated with gun products, including the following (emphasis mine): Shareholders request the
Post a Comment
Read more