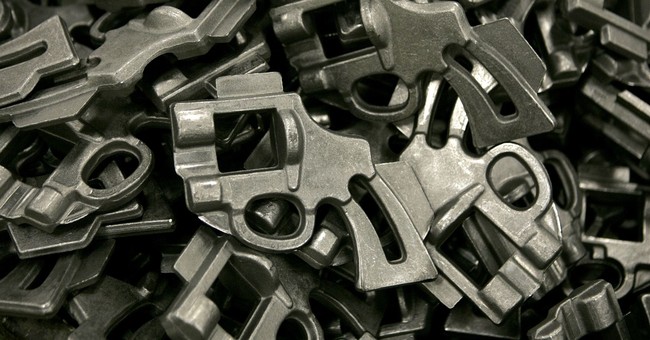 A group of 11 Catholic groups came together to purchase stock in Smith & Wesson. The group purchased 200 shares, the minimum number required to for shareholders to demand reports from the company. Now, they want the gun manufacturer to provide a report that details what the company is doing to promote "gun safety measures" and "produce safer gun and gun products."
According to an SEC filing, which is submitted to the U.S. Securities and Exchange Commission (SEC), here's what the group wants to see from Smith & Wesson:
Shareholders request the Board of Directors issue a report by February 8, 2019, at reasonable expense and excluding proprietary information, on the company’s activities related to gun safety measures and the mitigation of harm associated with gun products, including the following (emphasis mine):


Shareholders request the Board of Directors issue a report by February 8, 2019, at reasonable expense and excluding proprietary information, on the company’s activities related to gun safety measures and the mitigation of harm associated with gun products, including the following:
• Evidence of monitoring of violent events associated with products produced by the company.
• Efforts underway to research and produce safer guns and gun products.
• Assessment of the corporate reputational and financial risks related to gun violence in the U.S.
The resolution asks American Outdoor Brands Company (AOBC) to report on activities underway to mitigate the risks that its products may be misused in criminal acts of gun violence. Contrary to what the company suggests, AOBC has both the responsibility and capacity to play a more active role in how its products are used; the requested assessment and reporting are the first steps towards acceptance of this responsibility.  As a result of several high profile mass shootings in the past year, most recently the shooting at Marjory Stoneman Douglas High School in Parkland, FL, gun violence is increasingly being seen as a public health crisis with extraordinary human and financial costs.
Importantly, events of gun violence have led to mounting public backlash against gun makers and retailers including calls for boycotts, divestment and demands for gun safety regulation at both the federal and state levels. This environment presents serious business risks which demand a meaningful response from AOBC. The UN Guiding Principles on Business and Human Rights make clear the corporate responsibility to seek to prevent or mitigate adverse human rights impacts that are directly linked to their operations, products or services by their business relationships, even if they have not contributed to those impacts.
AOBC has a responsibility to mitigate potential impacts through improved monitoring of its distribution and retail sales channels and enhanced reporting on research and development efforts to improve the safety features of its consumer products. The resolution does not request that AOBC produce smart guns or other specific products; nor does it call for the company to endorse a gun control regulatory or policy agenda. The resolution does, however, ask for reporting because existing disclosures of current risk mitigation measures are seen as insufficient for investors to assess their effectiveness.

The argument in favor of the proxy ballot vote:


Given recent events of gun violence, weapons manufacturers are facing an extraordinary climate of heightened and sustained scrutiny which may negatively impact their businesses if they do not take more meaningful efforts to mitigate risks.

James Debney, the President and CEO of American Outdoor Brands Corporation, the parent company of Smith & Wesson, the entire saga is a political ploy.

“Unlike a bonafide investor, this proponent purchased just 200 shares, the bare minimum needed under SEC rules to place an item on the proxy with the sole objective to push an anti-firearms agenda, designed to harm our company, disrupt the local sale of our products and destroy stockholder value,” Debney said Thursday during a conference call with investors, Guns.com reported. “This proponent will gladly sacrifice its investments and yours to achieve its political objectives.”
During his call, Debney said this report does absolutely nothing to improve community safety. He believes this is just a move by gun control advocates.

"We find it curious that the proponents of this proposal overlook our long-standing call for and involvement in actions that truly have meaningful impacts, such as greater vigilance in enforcing the laws and criminal penalties on the books, and the need to meaningfully address the role that mental illness plays in senseless violence,” he said. “In contrast, the proponents’ efforts appear to be more about their anti-gun agenda.”

Sturm, Ruger and Company went through a similar situation back in May where they were forced to prepare a similar report.
The coalition who purchased stocks in Smith & Wesson include:
• Sisters of the Holy Names of Jesus and Mary, U.S.-Ontario Province
• Adrian Dominican Sisters
• Catholic Health Initiatives
• Congregation of St. Joseph
• Daughters of Charity, Province of St Louise
• Mercy Health
• Mercy Investment Services
• Sisters of Bon Secours, USA
• Sisters of Providence, Mother Joseph Province
• Sisters of St. Francis of Philadelphia
• Sisters of St. Joseph of Carondelet - St. Louis Province