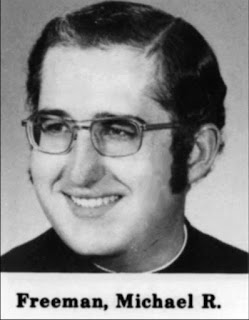 A deceased former Buffalo Diocese priest is accused of pointing a gun at the head of a teenage boy he was molesting in the mid-1980s.


The sexual abuses are alleged to have happened after Buffalo Diocese officials were told the Rev. Michael R. Freeman had molested other boys and young men, but kept him in ministry.
Freeman was serving as associate pastor at St. Mary parish in Lancaster in the mid-1980s when he allegedly pointed a gun at the boy to persuade him to have sexual contact.


That startling new allegation was made by the now-49-year-old man in a compensation claim submitted to a Buffalo Diocese program offering monetary settlements to victims of childhood sexual abuse.


The man also said in his claim that Freeman provided absolution of the boy’s sins immediately following the acts of abuse, according to Steve Boyd, an Amherst attorney who represents the man. Catholics believe that priests alone, through the Sacrament of Reconciliation, have the power to free those who confess their sins from the spiritual consequences of those transgressions.

“This was the pattern that began, that Freeman would have this child perform oral sex on him and then absolve him of the sin afterwards,” said Boyd.


The priest began having sexual contact with the boy when the boy was about 14, according to Boyd. 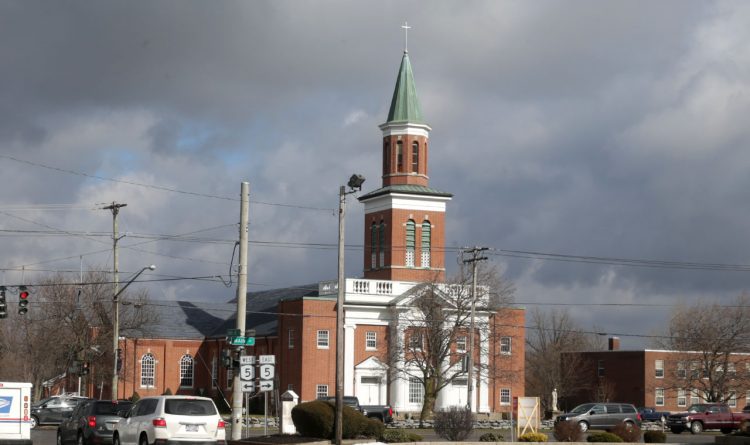 Boyd submitted the claim for the man, who declined to be interviewed by The News but authorized Boyd to speak on his behalf. The man lives outside of Western New York, said Boyd. He is married and has children.


The man also said that Freeman, a former Buffalo police and military chaplain, regularly carried a silver-plated .38-caliber revolver, according to Boyd.


“And if the child would not participate willingly in Freeman’s sexual abuse, Freeman would jokingly threaten him with the revolver,” said Boyd. “He always carried it concealed. And several times, Freeman put the gun to the boy’s head.”


In addition, the man accused Freeman of paying a male prostitute in Toronto to have sex with them both, said Boyd.


“Freeman would take the child to Toronto with him and on one occasion Freeman paid a prostitute whose name was Scott to have sex with Freeman and the boy,” he said.


The abuse began in 1984 or 1985 and continued through the victim’s high school years, said Boyd.

Buffalo Diocese officials knew in 1981 that Freeman had a history of abuse, according to a Pennsylvania grand jury report released in August.


Edward D. Head was the bishop of Buffalo at the time. One of his top administrators was Monsignor Donald W. Trautman, who served as diocesan chancellor and vicar general and was later named auxiliary bishop in Buffalo. Trautman became bishop of the Erie Diocese in 1990.


The Buffalo Diocese did not inform the public about Freeman until March 2018, when Bishop Richard J. Malone released a list of 42 priests who had been credibly accused of sexual misconduct with minors.


The Pennsylvania grand jury, in its investigation of clergy sex abuse in six Catholic dioceses in Pennsylvania, included Freeman in its report because it found that the Buffalo priest had ministered in various assignments in Pennsylvania.


The report said Freeman admitted to committing sexual misconduct with minors at St. Margaret and St. Lawrence parishes in Buffalo, where he served in the early 1970s, and at other clergy assignments. He also taught at Bishop Turner High School.


“The Grand Jury found no documentation in Freeman’s file that indicated that the Dioceses of Buffalo or Erie ever notified law enforcement officials, despite the fact that Freeman admitted to sexually violating children in at least five of his six ministry assignments,” the grand jury report said.
The News sought additional information about the allegations against Freeman from the Buffalo Diocese. Diocese spokeswoman Kathy Spangler said that officials could not provide answers at the moment because Freeman's personnel file - along with the files of other priests accused of abuse - has been handed over to the state Attorney General's office in response to a subpoena.


"At some point, when it is returned to us, time frame unknown, we will be able to respond to your questions," said Spangler.

View the entire document with DocumentCloud

One of Freeman's accusers, Paul Barr of Niagara Falls, said he first notified the diocese about Freeman in the early 1980s.
Barr said in an interview with The News that Freeman molested him in 1980 in the rectory of Sacred Heart Church in Niagara Falls, and he was outraged to learn the priest later victimized someone else.
“They knew, and they just turned a blind eye. What kills me is he abused people after I reported it. I think that bothers me more than anything,” said Barr, an attorney in Niagara Falls.


Barr also filed a claim this year for compensation from the diocese.
Barr said his abuse happened after the priest invited him to the rectory to talk about staying involved in the parish’s youth ministry program. The invitation seemed innocuous enough: Barr, who was 16 at the time, took his Catholic faith seriously and was flattered by the priest’s interest in him.
“The first thing he did was hand me a beer,” said Barr. “I didn’t even like beer, but I said to myself, ‘This is cool, I’m drinking beer with a priest.’ "


But at the meeting, Barr said, the priest told him he needed to be checked for a sports injury that could be serious if not detected early. “He said, ‘You want me to check you out, make sure you’re all right?’ ” recalled Barr, who was a high school wrestler. “He seemed to be stressing it was something that athletes got. So he was flattering me, saying, ‘You must be an athlete.’ ” 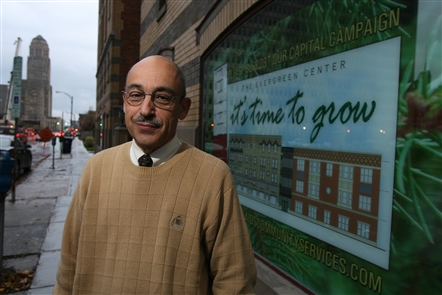 Barr said he trusted the priest. But then Freeman fondled him, he said. “It wasn’t an examination touch,” said Barr.


Barr said he reported the molestation to the Buffalo Diocese a couple years later, at the urging of a youth minister who drove him to the chancery offices. Barr didn’t recall the name of the woman to whom he gave the report.


“I don’t know if it was a nun or a social worker. I told her the story, just as I’m telling you,” he said. “She more or less thanked me for coming in. And that was it. There was no follow up or anything.”
Barr said he’s gone to counseling for years to work through the emotional impact of the abuse.

A summary of Freeman’s sexual misconduct was included in the Pennsylvania grand jury report, but it’s not clear if the grand jury obtained information about Freeman from the Buffalo Diocese or from a diocese in Pennsylvania.


A spokesman for the Pennsylvania State Attorney General's Office declined to comment on the discrepancies.


Trautman, who retired in 2012 and is now bishop emeritus of Erie, said he doesn’t remember Freeman working in any parishes in the Erie Diocese.


“I think it’s a mistake. He was never a priest of the Erie Diocese,” said Trautman. “I think his crime was he brought a young boy from Jamestown into the Erie Diocese and molested him.”

View the entire document with DocumentCloud

Trautman was a high-ranking administrator in the Buffalo Diocese for more than 15 years prior to his appointment in 1990 as bishop of Erie. In his administrative roles in the Buffalo Diocese – he served as Head’s second-in-command for much of the 1970s and 1980s – he likely would have dealt with abuse allegations against Freeman and other priests.


But Trautman, 82, said in a telephone interview that he didn’t recall the accusations against Freeman or how the priest’s case was handled in Buffalo.


“The general practice was if the priest has proven sins against him, he’s taken out of ministry,” he said.


Trautman was heavily criticized in the grand jury report for his handling of sex abuse complaints in the Erie Diocese.


But Trautman said he removed many priests from ministry and years ago handed over diocesan files on abusive priests to the Erie County (Pa.) District Attorney’s Office. He served as Erie bishop until his retirement in 2012.


“Not everything in that grand jury report is accurate,” he said. “I think there are many instances where the report is not factual.”


The grand jury report stated that Freeman’s faculties as a priest were revoked in 1989 and that the diocese continued to provide financial aid to Freeman until July 31, 1999, when he told diocese officials that he had a new job that would provide a salary and health insurance.


Freeman went on to work for the Veterans Health Administration. He was listed in 2009 as a social worker with the Canandaigua VA Medical Center in Ontario County, according to federalpay.org, a website that tracks federal employees.


He died in 2010, at age 63, in Highland Hospital in Rochester after a brief illness, according to an obituary in the Niagara Gazette.