Trump: 'Take the Guns First, Go Through Due Process Second', tells lawmakers not to fear NRA 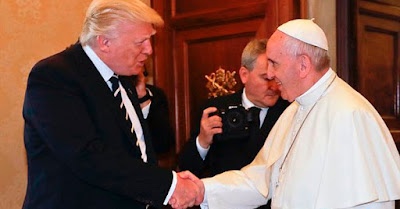 Source: https://reason.com/blog/2018/02/28/trump-take-the-guns-first-go-through-due
President Donald Trump, who campaigned as a defender of gun rights, told a bipartisan group of politicians today that authorities should have simply taken away Florida school shooter Nikolas Cruz's weapons:


"The police saw that he was a problem, they didn't take any guns away. Now, that could've been policing. They should've taken them away anyway, whether they had the right or not."


"I like taking the guns early, like in this crazy man's case that just took place in Florida ... to go to court would have taken a long time," Trump emphasized. And he said this:


"Take the guns first, go through due process second."


This comes from a president who only a few weeks ago wondered aloud on Twitter, "Is there no such thing any longer as Due Process?":

Peoples lives are being shattered and destroyed by a mere allegation. Some are true and some are false. Some are old and some are new. There is no recovery for someone falsely accused - life and career are gone. Is there no such thing any longer as Due Process?

Here's the reaction of longtime gun-control supporter Sen. Dianne Feinstein to Trump's suggestion that an "assault weapons" ban be added to legislation from Sens. Joe Manchin (D-W.V.) and Pat Toomey (R-Pa.) that would expand background checks:

Is this truly a Nixon-Goes-To-China moment, in which the Republican Trump, who also said today that he "loves the Second Amendment," will restrict gun ownership more than any president since Bill Clinton signed the assault-weapons ban into law in 1994? That remains to be seen, as Trump has double-reversed course in the past, such as when he agreed to legalize "Dreamers" in a deal with Democratic lawmakers before changing his mind. In the meantime, Trump's criticism of the NRA and embrace of gun control is leaving progressives as bewildered as it is making conservatives angry as hell:

“Take the guns first, go through due process second.” — @realDonaldTrump

Imagine if Obama had said this. Fox News and Republicans would’ve called for him to be impeached.