What St. John XXIII has to say about gun rights

"...the Catholic moral tradition emphasizes how such defense is primarily the responsibility of legitimate authorities—namely, the police and the military." 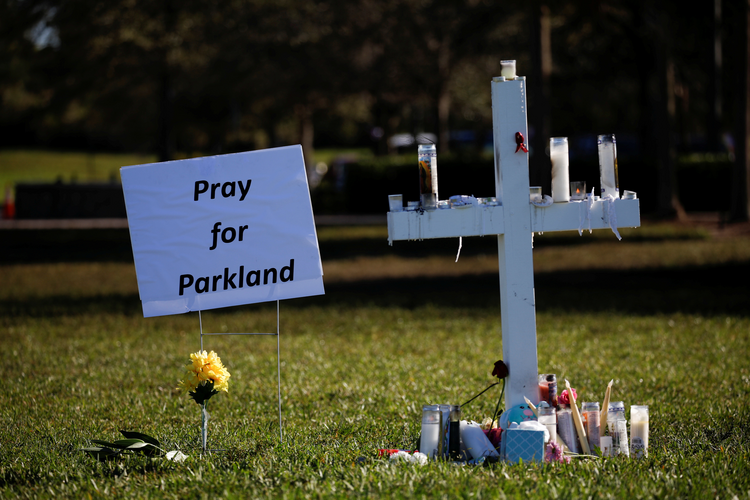 A cross in a Parkland, Fla., park, put up of Feb. 16 to commemorate the victims of the Feb. 14 shooting at nearby Marjory Stoneman Douglas High School that left at least 17 people dead.  (CNS photo/Carlos Garcia Rawlins, Reuters)

In the wake of repeated mass shootings, most recently at a school in Parkland, Fla., on Feb. 14, many of us are asking what resources are available to educators to address questions of gun violence and gun control. In my experience teaching social ethics, I have found that Pope John XXIII’s social encyclical “Pacem in Terris” generates important insights that are relevant to the current debate. The encyclical reminds us that in our public discourse around guns, we talk a great deal about rights and not enough nearly enough about duties.

In Part I of “Pacem in Terris,” John XXIII writes that “every human being is a person; that is, [human] nature is endowed with intelligence and free will.” Because of this, every person has rights and obligations that flow from his or her very nature, and “as these rights and obligations are universal and inviolable, so they cannot in any way be surrendered” (No. 9). Accordingly, the pope enumerates several human rights (the right to life, bodily integrity, an ability to practice religion privately and publicly, emigration and immigration, and more), while also listing several human obligations that correlate with these rights. For the pope, “the right of every [person] to life is correlative with the duty to preserve it”; so, too, “[the] right to investigate the truth freely” correlates with “the duty of seeking it ever more completely and profoundly” (No. 29).


In our public discourse around guns, we talk a great deal about rights and not enough nearly enough about duties.


In the wake of the shooting in Parkland, intense public debate has occurred about whether guns ought to be regulated in order to diminish the likelihood that such atrocities will happen again. Many citizens and groups such as the National Rifle Association oppose any proposals that they say could threaten the Second Amendment right to keep and bear arms.

Repeal the Second Amendment
The Editors

Can students of the Parkland massacre make a difference in U.S. gun debate?
Kevin Clarke
As noted above, “Pacem in Terris” highlights every person’s right to life and every person’s duty to preserve life; however, unlike the Second Amendment, there is no explicit mention of a right to keep and bear arms. According to the Catholic moral tradition, individuals may legitimately defend themselves and other innocent persons against unjust attack—that is, if we follow the teaching of St. Thomas Aquinas rather than St. Augustine, who prohibited self-defense but justified defense of others. Such a right to life and its corresponding duty to protect life may encompass the ability to own certain appropriate weapons such as firearms, but the Catholic moral tradition emphasizes how such defense is primarily the responsibility of legitimate authorities—namely, the police and the military. For example, the only time I ever owned firearms was while working in law enforcement in both corrections and policing.


Cardinal Timothy Dolan: “Regulating and controlling guns is part of building a Culture of Life, of doing what we can to protect and defend human life.”

In its focus on the right to life and the duty to defend life—rather than on a right to keep and bear arms—perhaps “Pacem in Terris” allows us to ask: What if it is the easy availability of guns that poses a threat to innocent lives? Don’t we have a duty to defend life by regulating guns? As Cardinal Timothy Dolan, the archbishop of New York, put it in his 2013 message, “Advocating for Gun Control”: “regulating and controlling guns is part of building a Culture of Life, of doing what we can to protect and defend human life.”

The current gun control debate illustrates what David Hollenbach, S.J., has referred to as claims in conflict. Father Hollenbach observes that our clarity around “rights vocabulary is far from being matched by our understanding of what human rights are, how they are interrelated, how they are limited by each other, and whether they can ever be subordinated to other social values.”

So goes the current debate: the right to life versus the right to guns. While the N.R.A. defends the latter as an absolute right, the U.S. Conference of Catholic Bishops views gun control legislation as a right to life issue. In the U.S. bishops’ testimony submitted for the record before the Senate Judiciary Committee on Feb. 12, 2013, the bishops’ 1994 pastoral message, “Confronting a Culture of Violence: A Catholic Framework for Action,” is quoted: “We have an obligation to respond. Violence—in our homes, our schools and streets, our nation and world—is destroying the lives, dignity and hopes of millions of our sisters and brothers.”

Again, in 2000, the U.S. bishops issued “Responsibility, Rehabilitation, and Restoration: A Catholic Perspective on Crime and Criminal Justice,” calling on Americans to build a culture of life and to end violence in society. The bishops recommended:
These seem fair to me. The editors of America went even further on Feb. 25, 2013, by calling for the repeal of the Second Amendment. I don’t see that happening—or lasting. Still, given what “Pacem in Terris” emphasizes about the human responsibilities that accompany human rights, we still need to ask the questions: “In our time, is a given constitutional provision a good law or a bad law? Does it promote the common good?” We Americans, Catholics included, need to engage in more public conversation along these lines with regard to gun regulations.

Editors’ note: This article builds on an essay first published on April 11, 2013, on the “Catholic Moral Theology” website.

November 26, 2018
A deceased former Buffalo Diocese priest is accused of pointing a gun at the head of a teenage boy he was molesting in the mid-1980s. The sexual abuses are alleged to have happened after Buffalo Diocese officials were told the Rev. Michael R. Freeman had molested other boys and young men, but kept him in ministry. Freeman was serving as associate pastor at St. Mary parish in Lancaster in the mid-1980s when he allegedly pointed a gun at the boy to persuade him to have sexual contact. That startling new allegation was made by the now-49-year-old man in a compensation claim submitted to a Buffalo Diocese program offering monetary settlements to victims of childhood sexual abuse. The man also said in his claim that Freeman provided absolution of the boy’s sins immediately following the acts of abuse, according to Steve Boyd, an Amherst attorney who represents the man. Catholics believe that priests alone, through the Sacrament of Reconciliation, have the power to free
Post a Comment
Read more